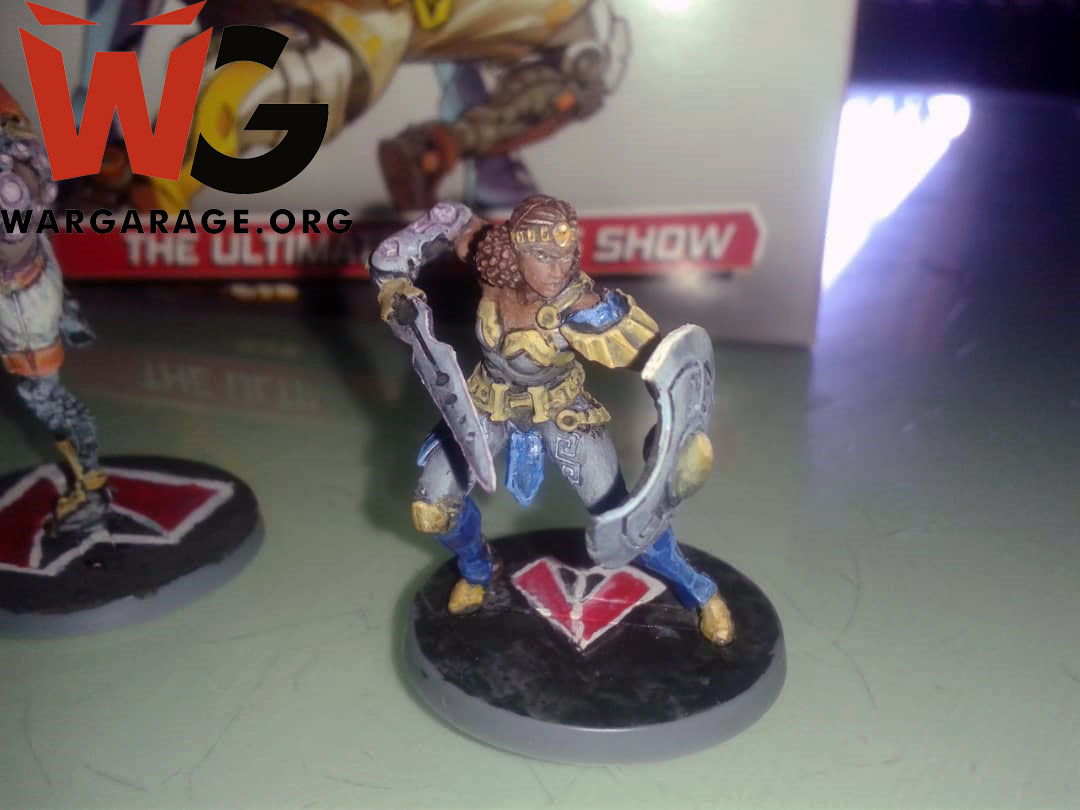 A short analysis of Hippolyta from the Reckless Hearts expansion of Aristeia! the board game about the bloodsport of the Infinity universe.

As our readers know, we are fans of this strategy game created by Corvus Belli as an Infinity spin-off, in a previous article we had already reviewed it.

Aristeia! It is a bloodsport in which two teams face looking to score as many points as possible, it is a very dynamic and violent sport, there are blows, shots, poisons, traps and other tricks to make us enjoy.

One of the keys to the game is the availability of various types of characters that adapt to different game styles, which is why Corvus Belli has a tight schedule to launch expansions.

Reckless Hearts is the most recent expansion for Aristeia! available at the moment though DOuble Trouble has been already Announced, and is part of the small expansion format, those are the ones that bring only two characters. In the box, we will find an Amazon warrior, Hippolyta, and a contact fighter, with a Muai Thai style pose, Axl Steel.

HIPPOLYTA THE LEADER IN RECKLESS HEARTS

Hippolyta is an artificial intelligence with a personality inspired by a legendary heroine of Ancient Greece, uploaded into a biosynthetic body, Hippolyta was created by the ALEPH Artificial Intelligence.

The aim of Hippolyta was to serve as an inspiration to the young women of the Human Sphere to enter military service, so she was originally a character in a series transmitted by the Mayanet network.

Hippolyta is presented as a fair warrior, who prefers diplomacy over violence but who will not have compassion if forced to resort to it. In fact, she is the Honorary Ambassador of O-12, used as the face of justice, peace and equality in the Human Sphere.

Her Attributes are not outstanding, in fact they are on average or below except for vitality. But in attributes is not where Hippolyta stands out.

She has a pretty good defense, using a green, a blue and a black dice, with high chances of getting more shields than necessary, we’ll see why this is important to her.

Then we have a strength with a blue dice and an agility with orange dice, both not optimal but decent.

Now there’s something that got our attention, Hippolyta doesn’t need to take out! in the dice to activate your General Change, being one of the few characters with that feature, in addition, to activate it she only requires a shield , when you get a shield you can choose to give a +2 to the initiative to an ally until three squares away or herself, she can do it even if she has no Line of Sight .

This General Change reflects her leadership and inspiration, her ability to command the Hexadome, as well as the battlefields, under her orders her team is organized efficiently and acts quickly in every situation.

The first Action, Myrmidon Steel , is an attack of 3 points and quite powerful with enormous potential for damage, the black die represents the shield it carries on the other arm. It also imposes a -2 on the initiative of the attacked enemy whether it has been successful or not.

Then we have Inspire a Supporting Action, for a cost of one Energy point we use a yellow and an orange dice to grant herself or an ally up to six spaces away a +2 initiative marker, even if she has no Line of Sight, highlighting that any additional shield can be used to improve the initiative to any other ally in range 0-3 through the General Change.

Then come the Automatic abilities, Boosted Reflexes gives you a point of movement in your Actions phase for each point that your initiative is above four, this means chances are she will have five of initiative and movement very often, and can even reach 6 if she is attacked before her turn and use a shield to make a change during her defense, for example.

Finally, with Shot Down Leader, we have the devastating effect it has when a leader falls, her team is baffled and must be reorganized, in Aristeia! we see the effect by losing the initiative markers granted by Hippolyta or other characters, eliminating even those negative initiative states imposed by your enemies . [Thanks to UVECB for the clarification]

This last Automatic Skill makes Hippolyta an attractive target, but with such a good defense and with such a high probability of generating +2 markers for her team, coupled with such a devastating melee attack, it will not be an easy choice for her opponents.

DDO Field is an excellent support tactic, potentially for a full turn, she and her allies within range, may reroll any number of Defense dice once per roll, greatly increasing the defensive capacity of the team that Round.

In Amazon Wedge! we clearly see how morale is affected in enemy troops when this leader is in our team, affecting both her teammates and her enemies whether or not they are in her Line of Sight, granting initiative markers to the firsts and imposing the status of stunned to the lasts.

A tactical card that will allow us to do very interesting things if, for example, we have Final Boss in our team.

Clairvoyance tactic is quite clear and simple to understand, as well as to imagine the use we can give it. It simply serves to impose a penalty to te enemy in initiative to let us be the first to play, it can be used with any Aristo .

Finally, Athena’s Blessing allows Hippolyta to remove harmful states on her companions with an affected initiative, be it for her actions or even imposed by their enemies , that is, if your opponent imposes an initiative counter -2 on one of your characters, she can use Athena’s Blessing on him or her.

Final Boss can take advantage of the stunned states from the Amazon Wedge! tactic to gain mobility with his Swim Move Action, immobilize through his Crystal Clear tactics or do two damage to a stunned character with OHOHO, surprise!

With a high defense, with very high probability of distributing Initiative markers, a powerful melee attack and good support tactics Hippolyta is emerging as a great leader to lead our teams to victory.

I definitely liked her a lot, it should be noted that I am still new to Aristeia! and I have only used the base box and Reckless Hearts, as I incorporate other expansions I plan to update the data in each review/analysis of the characters.

So far this little analysis of Hippolyta, I hope you liked it as much as I liked this character. How did you like it? Do they have a better leader? Do you see any potential combo / synergy?

I remind you that you can join WGC Aristeia! and WGC Infinity the biggest Corvus Belli games communities, if you speak spanish you could also join the Facebook community for Infinity and Aristeia !, Infinity the Game in Spanish .