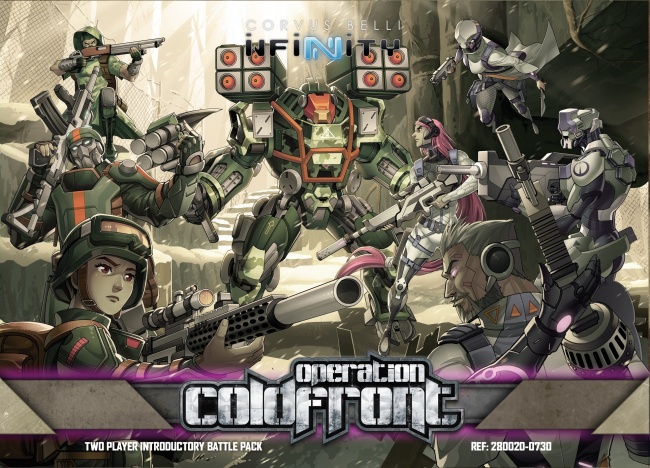 Operation: Coldfront, the new Infinity Starter box teaches you how to play and the most basic of possible strategies, in this review we will address that and more.

As you could read on our site, the week before Gen Con Corvus Belli created high expectations among the wargamers community by announcing Infinity Operation: Coldfront, a new two player’s starter box , to be sold through pre-order on their website and immediately during Gen Con 2018.

If you want to know the contents of the box check out this article , if you prefer to see it in video we recommend the unboxing by Miniaturas Estadio Wargame.

If you are new to Infinity game, we can summarize the situation as the following: 177 years in the future, humanity has conquered the stars, it has expanded by numerous solar systems, the set of colonized systems is called the Human Sphere.

In addition, as expected, human beings are divided into large nations or factions that do not necessarily correspond to those existing on Earth today, in fact each nation is made up of different cultures, although there are dominant features that are imposed on each.

The two Factions that we find in the box are:

To know more about each faction, tactics, strategies and style of game, I recommend the article  Infinity: which faction is for you?, written by Adam Bienvenu for The Dice Abide and translated into spanish by us.

Operation: Coldfront occurs in Dawn , the first habitable exoplanet humanity reached, and where the new settlers of the Ariadna ship were left when the wormhole that took them there suddenly collapsed.

The Ariadnans, stranded on a strange planet, managed to conquer ground little by little on a planet with an native alien race called Antipodes which resembles werewolves.

When humanity reestablished contact with Dawn there was a short conflict that helped to establish rules and divide the territories of the planet among the different nations of humanity.

One of those territories of Dawn was the island of Novyy Cimmeria, where the Yu Jing nation established a base of operations called Kurage. When the events narrated in the Uprising book occurred, the Japanese Secessionist Army (formerly known as Japanese Sectorial Army), separated themselves from the Yu Jing Imperium, generating in that base becoming part of the Great Independent Japan. This conflict is known as the Kurage Crisis.

If you want to know more about the Kurage Crisis campaign, who was the winner and how this modifies the background and the universe of Infinity permanently visit this Video on Youtube

During this crisis, the suspicions about the presence of alien forces from the Combined Army in Dawn were confirmed. This caused Aleph to request permission for the establishment of an Aplekton network, an operational base of the Special Situations Section (SSS), to monitor and counteract the hostile intervention of this alien force.

Despite Ariadna’s protest, O12 approved the installation of two Aplektons in the so-called Exclusion Zone, a territory assigned to this nation, which did not make them very happy, they considered it as a kind of silent invasion of their territory.

As expected, the Ariadnans would not sit idly,they reacted trying to retake control of their territory, this operation is known as Operation Coldfront.

INFINITY OPERATION: COLDFRONT AS A TOOL TO LEARN TO PLAY INFINITY AND AS AN INTRODUCTION TO THE MINIATURE GAMES, REVIEW OF A SELF-TAUGHT BEGINNER.

I have been tracking infinity for some time because I love their miniatures and I am really fascinated by their background and the excellent work of their communications team, but I never really got into reading the rules, and when I heard about the releasing of Operation: Coldfront I said “why not to expect that box and approach it as a beginner?”

I know some will say that there are Warcors, volunteer players and promoters, who can help you understand the game, its logic and mechanics, but in reality there are not Warcors in every city to teach us how to play, lamentably not at this moment at least.

The first thing you notice when opening the box is that all the products are of very high quality, and everything is very well organized.

The A4 size manual is printed in full-color and glossy paper, it comes in English and Spanish, with the complete background of the Operation, the rules and a brief introduction guide to the hobby.

Introductory GUIDE TO the HOBBY

Miniature wargames should not be seen as a single hobby, since we can identify at least three different ones: assembling and painting models and figures, the playing of the games, and collecting.

The scale modeling hobby is referred to in the handbook of Operation: Coldfront, it is identified as Introduction to the Hobby. It is not very long, in fact it is limited to enumerating necessary tools, basic procedures and showing the painting process of a couple of units.

It is a fairly short guide but fulfills the objective of teaching the most basic of the hobby.

The miniatures are made of metal, every one of them is beautiful and full of details, easy to assemble and with little material to clean them of. Likewise, due to the high amount of details we can assure that they are easy to paint even for a beginner, of course, at tabletopish level, I’m very far from it but I’m already practicing to become a better painter.

I must say that beacause of my lack of experience I had a hard time assembling the miniatures that had three moving points, but then I got the trick.

INTRODUCTION TO THE RULES OF INFINITY MINIATURES GAME IN OPERATION: COLDFRONT

Infinity is a miniatures game whose main rulebook, without universe background, has more than 250 pages, it has lots of details and things to consider, so how could that be condensed in a few pages? easily, limiting the options at the beginning.

The game rules, FAQs and additional material can be downloaded for free from the Infinity the Game website .

Operation: Coldfront, as well as the previous starting boxes, use a basic and condensed version of the rules that will reveal more and more rules as we play the missions within this handbook, at first the most basic is explained, trooper profiles, Line of Fire, normal and face to face rolls, Automatic Reaction Orders (ARO), modifiers, initiative and game sequence among other, adding new rules and expanding the existing ones as we play each new scenario.

The first four missions are extremely simple, they are about exterminating the opponent, this kind of missions is not the only one we will encounter in this game but serve to practice and assure we understand the most basic layer of the rules before go deeper into them.

MISSIONS AS A TEACHING RESOURCE

Then comes the Sweep the Administrative Area, the second mission where the concept of lieutenant is introduced, as well as regular, irregular and lieutenant orders, rules of initiative and deployment are expanded, besides we get to know AP Special Ammunition.

Sweeping the Sickbay is the third mission in which we are introduced to the Special Skills of camouflage and mimetism with its associated rules, which leads us to increase the actions we can take as ORA.

In the Infinity forums you can discuss strategy and different topics of interest of the game.

The fourth mission is called Secure the Comm Station, where we’ll learn the use of silhouettes to determine if there is a Line of Fire, an automatic movement called Warning, Special kills Infiltration and Veteran, as well as two new weapons, Boarding Shotgun and MULTI Sniper Rifle.

To finish this first contact with the game we have Control the Maya Node, the fifth mission where we will learn Dogged, No Wound Incapacitatio , Chain of Command and Lo-Tech Special Skills, two new states, unconscious and dead, and two new weapons are added to our arsenal, the Heavy Shotgun and the Heavy Rocket Launcher, plus the Silhouette Template 5 added to be used for Armata-2 Ratnik 2 Miniature.

These five missions are designed to teach you the most basic and necessary aspects of the game but it is only tear the surface of everything that can be done in a game, to learn the rest just read the full rulebook, available for free on the page Infinity The Game, and go experimenting with new troops with Special Skills that we have not seen and using new weapons. If you want the complete rulebook version, which includes background you could buy it form Corvus Belli Store or your favorite retail vendor.

After reading the rules of these starting scenarios, it seemed simple, although at the beginning of the game we realized that we had some unresolved doubts and that they could very well be clarified in the rulebook.

An example of this is the cover situation, which only applies when the base of the model is in contact with a piece of scenery which structure blocks the Line of Fire. While the other big doubt was about bursts and hit, we didn’t understand at first that more than one shot may enter an attack.

After having assembled, painted and played this starter box with my ten-year-old son and my wife, my eight-year-old daughter did not paint although she did play the first two missions, I can say that Infinity Operation: Coldfront fulfills what it promise, serving as a good two-players game, as an initiation to Infinity, allowing you to learn the most basic rules of the game step by step, and as an initiation to the hobbies related to the miniature wargaming by giving us a small guide of assembly and painting as well as beautiful and great quality miniatures.

As for my son, Leonardo, his opinion is as follows, “It is one of the best games I’ve seen, I love ORA’s mechanics, the ranged battles and how they resolve, as well as the stealth mechanics, I don’t know how to explain it, I just love it “

Finally, I can’t say goodbye without first inviting you to visit and join  WGC Infinity the biggest and greatest community in english for Infinity the game. If you are able to understand spanish language you are also invited to Infinity the Game en Español, the Spanish-speaking global community for Infinity, where you can share everything related to the game, clarify doubts with other players and warcors and have a cool time.