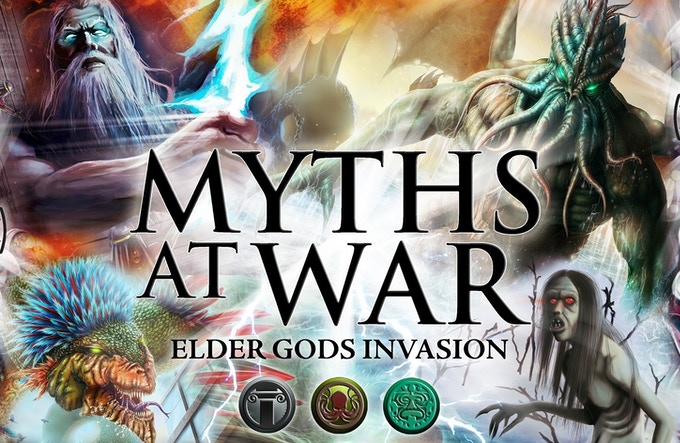 Myths at War is in Kickstarter, the only card game in which you can confront gods and heroes from different mythologies in a battle for power.

You will confront Ra, Odin, Hercules, Cthulhu, Quetzalcoatl, and many other characters under your control in an epic battle. Would you like to have your favorite pantheon at your disposal and put it to fight against others? Who would you choose? Thor? Ares? Cthulhu? Find it out in Myths at War.

GDM Games is a spaniard games publisher which first born son is the game which gave the very name to the company, Guerra de Mitos (GDM) or Myths at War, now they will publish it in english language thanks to a Kickstarter campaign, in order to help you decide I suggest you to read the following review.

Imagine that  you are a powerful being who with the most powerful gods, heroes, mortals and artifacts of your favorite mythology under your control. You could summon Quetzalcoatl, Thor or Hercules to assist you in the battle against your rivals, you could have access to Olympus, the Jade Palace or the Unknown Kadath, if you like the idea welcome to  Myths at War.

Myths at War is a card game  created by  Francisco Gallego  and take us inside a story where gods and other fantastic beings, objects and places have appeared on Earth and we must battle against others mythologies to control the world.

In fact, it is worth mentioning that it is not only a simple game but also  has a novel and a  series of short stories (in spanish)  that will give more life to the world and enhance the immersion to those who decide to enter this game. Having said this, let’s to talk about this game.

The Art of Myths at War (MAW)

It seems to me its art deserves a subtitle for itself, in general the art goes from regular to really spectacular, I specially like the Chinese cards of the III era, they are beautiful. Which is not to say that all the illustrations are great, but this is something that happens even in well-known and games, there are simply  several illustrators, various styles and different tastes.

However, and despite not knowing all the cards in the game, I think that  illustrations generally represent very well what they are supposed to , that is, so we could say they fulfill their objective.

I know some of you will see the art and thing well it’s not a great deal, this or that game has better art, specially comparing it to decades old games from big publishers, but I would ask you to compare these cards with those of the first editions of those other games, think it comes from a little spaniard publisher and evaluate the quality with this in mind.

How to play Myths at War (MAW)

First of all, it is important to make clear that one of the great things about Myths at War is that it is not what we traditionally know as a Trading Card Game  (Magic: The Gathering, Pokémon, Yugioh …), where you must be constantly buying sealed boosters of cards hoping to be lucky enough to get at least one useful card, War of Myths has a marketing model more like the one of the Living Card Games  of Fantasy Flight Games, in which you buy a thematic box whose content is always the same but that you can use in several different ways and which you can also expand with other boxes.

The boxes I own, from Eras III and IV, contain cards, game rules, and two  suggested deck listings for beginners to play immediately after purchasing any game box .

Each box brings between 150 and 162 cards, each deck must have a minimum of 51 cards, being precisely this number of cards contained in the suggested decks, leaving a few dozen unused cards that we would have available later to modify our decks or even make fully customized decks.

In order to play, each player must have a  Pantheon card  which has a permanent ability in the game and will define your general strategy, a  Gods deck  with at least 20 cards and a Designs deck with at least 30 cards.

Each player has three areas,  Oracles, where the cards from the Gods deck go,  Pantheon, area where Pantheon card itself is placed as well as the active cards, Influence step takes place in this area, and finally the Battlefield, area where Confrontation phase takes place and our heroes, gods and criatures will battle.

In Myths at War you must play with the Designs cards you have in your hand, comprised of equipment and actions, as well as the ones you have in your Oracles made with the Gods deck, where you will find characters and resources, all of this while managing your Power Tokens, which are at the same time your currency to pay for the costs of both characters and equipment and also represent your life.

GDM Games has also some other interesting games you should check, like Metal Mania, Wanted 7 or the Spiel des Jahres winner Sherlock (Q Mysteries).

The objective in a Myths at War game is to obtain at least 30 Power tokens after any phase of Reorganization, additionally, and depending on the strategy of your deck you could instead try to make your rival(s) lose all their Points, being eliminated on the spot.

To end this introduction to Myths at War I must speak about one of the best aspects of the game, it is that we are dealing with a highly competitive game, whose cards are designed to be played together with others and can create truly deadly combinations, it is a game with huge potential for fun, development and competitiveness, and GDM Games knows this, which is why they have an organized game system and tournaments in Spain but that will soon be available to the US and Latin America.

Having the opportunity to try Myths at War has been an excellent experience for me, I have not played a deck building game since I stopped playing a couple of famous Trading Card Games and I must say that I liked the experience a lot, however, not everything is positive, so I go first with the negative points.

Should I Back their Kickstarter campaign?

Anyway, let’s summarize, it is a nice game, very fun, highly competitive, which requires strategy and tactical decisions, which has resource management mechanics, direct confrontation, synergy between different cards and deck construction, with a couple of issues which can be easily corrected.

Do I recommend Myths at War? Of course, you should back their campaign with your eyes closed unless you don’t like the features listed above.