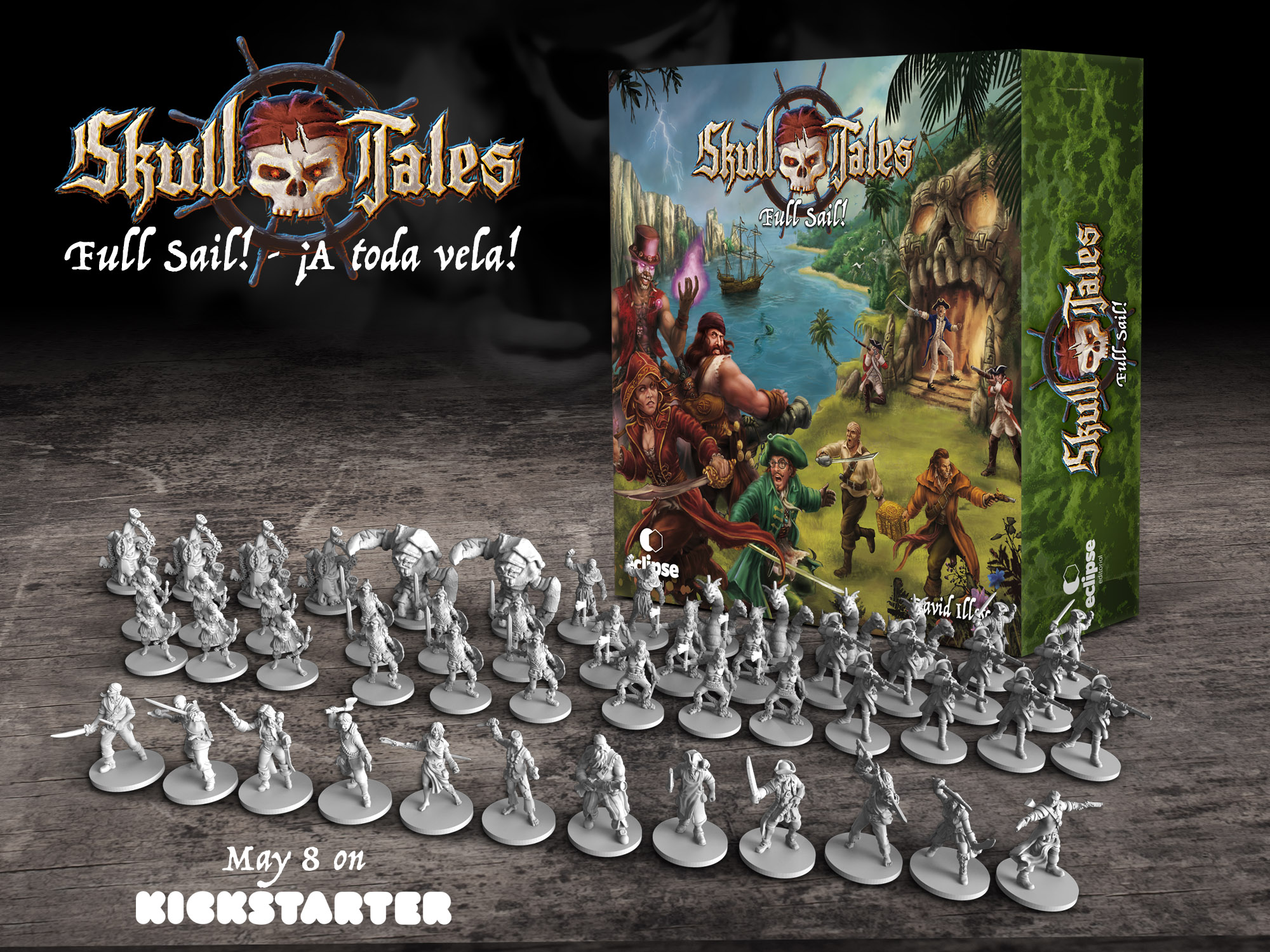 After the successful crowdfunding campaign for RatLand, Draco Ideas and Eclipse Editorial return to the ring with another proposal in Kickstarter which looks very good, it is nothing less than the miniatures game called Skull Tales: Full sail!

These publishers do not take a breath, Ratland has barely reached his backers, stores and distributors and they have already announced their new campaign, with a game in which they have been working since last year.

The launch date will be next Tuesday, May 8 at 4:00 pm (Spanish time), that day is also the first anniversary of the launching of the successful campaign for the first Skull Tales and what a way to celebrate it!

What do we know about Skull Tales: Full Sail!? 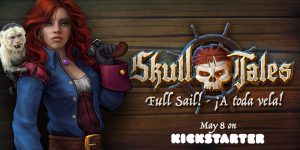 Skull Tales: Full Sail! is a semicooperative pirate themed adventure game for 1 to 5 players created by David Illescas, designed by Jaime González and illustrated by Roberto Picó and Francisco Arenas.

In this new installment of Skull Tales you will be a pirate in search of fame and fortune, your character will be part of the crew of the fearsome “The Southern Lady“, which sails in the dangerous waters of a Caribbean Sea full of monsters and opportunities not suitable for cowardly freshwater sailors.

Each of these characters will have a beautifully illustrated card and a miniature that represents it through the different boards. All the Character Attributes as well as their initial equipment will be on the card.

Skull Tales: Full Sail!, as previously said, is a semicooperative game for 1 to 5 players that will be played through campaigns but you can also play individual scenarios independently if you do not want a long-term commitment.

The game time has an estimated 60 to 90 minutes a scenario and 150 minutes for a full chapter. The chapters are divided into three totally different phases and with different mechanics, these phases are Adventure, Crossing and Port.

In the Adventure Phase, you must explore mysterious islands, dangerous caves, Temples or sack colonial villas, being able to obtain treasures unimaginable for the rest of the mortals.

In this phase we will use very well illustrated terrain tiles with a grid that you will have to take randomly among those that form the scenario, giving this way greater replayability to it.

This phase of Skull Tales: Full Sail! is highly tactical, and in it we will use both the miniatures of the characters and those of the enemies, who also have character cards and a random as well as automated system of actions, so no player is required to make the tactical decisions of the enemies.

Combat will be ranged and melee, your character could be stunned or knocked down, you will have to roll skill checks against opponents. There seems to be enough options to be fun.

During the Voyage Phase you will travel aboard “The Southern Lady“, a dreaded pirate ship sailing the Caribbean Sea on a map divided into hexagons.

When we are in Voyage we will have to fight against terrible sea monsters, to approach other boats in search of the booty and to fulfill the commissions given to the Captain. All this while we try to prevent a riot from erupting.

This phase will be played with cardboard markers, but in the campaign will be available an add on of plastic ships and monsters.

When we play the campaign we will have a stage called Port Phase, in it we will be able to heal and improve our characters, acquiring new skills and equipment, we will also get missions that we will try to accomplish during the next Adventure Phase by adding specific tasks to perform during the same, and we can repair and equip “The Southern Lady” too, among other things.

It is important to note that each action taken in this phase has a cost in units of time and each player will have a limited amount of time that he/she must decide how to invest.

As we can see, Skull Tales Full Sail! is really like having two different games in a single box, or even three if because the actions in the Port phase require resource management for customization and recovery of both ships and characters.

On the other hand, between the randomness of the scenarios, which will cause the same scenario to be different each time it is played, the missions acquired in the Port Phase and the variety, as well as the personalization of the characters, make this game look like be very replayable.

Finally, seeing what we know so far of the system, the quality of the illustrations and the miniatures, it seems to me that this game looks quite interesting and a good candidate to increase our dear gaming libraries.