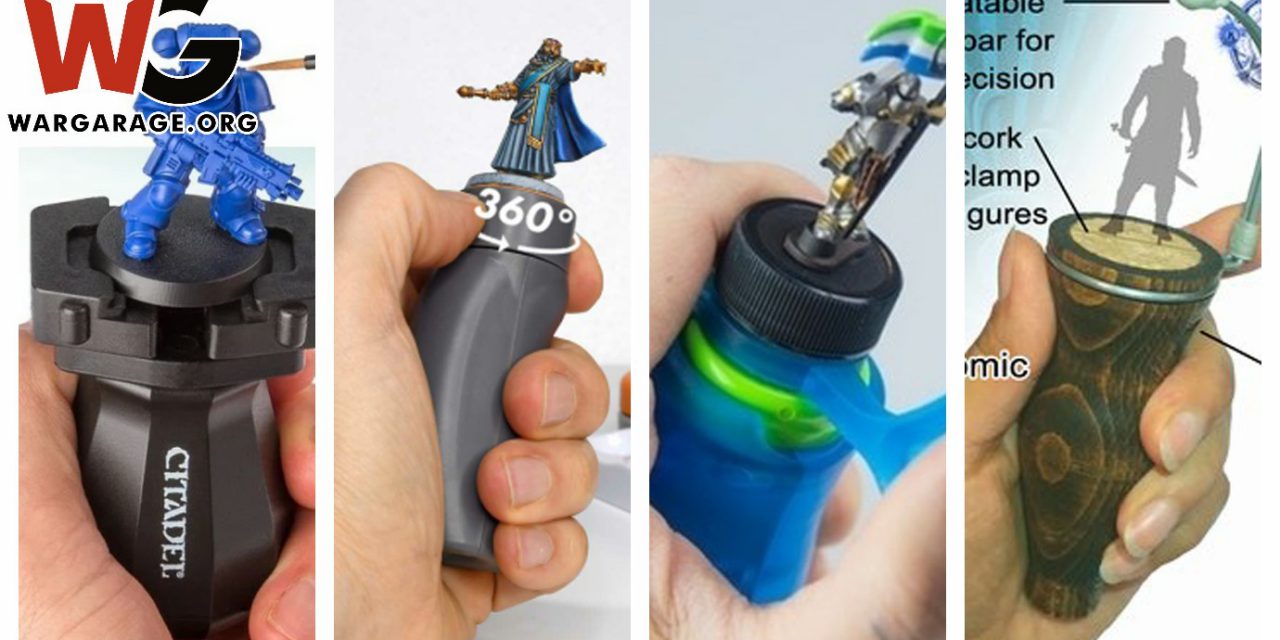 We are looking for the best miniature painting handles/holders to ease our job, so we decided to review the top options in the market.

All of us, people in the hobby of scale modeling or miniature painting for wargames know how uncomfortable and inconvenient it can be to take a miniature by the base to paint it without touching anything else, something that often ends in disaster, I’ve accidentally droped miniatures or erased a nice work by puting my fingers where i shouldn’t.

To solve this problem, hobbyists have devised creative, functional, although not optimal solutions, some stick the miniatures to corks, others to empty paint pots or the like, however, today they are not the only, let alone the best, options we have.

I’ve been thinking that I should invest to buy one of these handles to hold miniatures, so I decided to take a look at the options on the market and I will talk about those I am taking into consideration.

I’ll start with what is currently my favorite, the RGG 360 Miniature Holder Handle Painting from Redgrass Games. Redgrass has some products that look great, very high quality, in fact I’m dying to try their wet palette , but we’ll leave that for another entry.

Returning to the topic, the characteristics of this product are:

The cost of this handle is only € 10 ($ 10.93), a good price if we compare it with other options, including some with seemingly cheaper materials.

Lee también  Knives in the Dark by Christopher Willett, a story for Infinity Writing Contest

As if this were not enough, I found that Redgrass is running a Kickstarter campaign later today to start producing a second improved version of this miniature handle, let’s take a look at the new features of RGG 360 Enhanced Edition.

In this new version they incorporate two very interesting features, the ability to change the rotating cap and a magnet at the base of the handle, to avoid accidental falls that could end in tragedies. In addition, the Kickstarter will include a printed copy of the book that Ángel Giraldez has written especially for Redgrass Games and that you can download for free from their website.

The Kickstarter campaign for the Enhanced Edition is now online and it looks great.

For € 12 you get 1 RGG 360 , with 15g of orange putty specially developed to mount the miniatures, 1 metal plate with 3M adhesive for you to place your magnetized handle when you are not using it and 1 printed copy of Ángel Giraldez’s book .

For € 17 you get all of the above but with two additional caps, and an additional 15g of orange putty, it is good to know that only 5g are required to mount a miniature as they claim on their website, it would be a total of 3 rotating bases and 30g of putty .

In the other levels they only change the number of caps and putty obtaining nine caps and 75g of orange putty for € 32 and 12 caps with 105g of putty for € 42, ideal for those massive projects, but not for me yet.

The shipping cost worldwide will be € 5 to € 7, not included in the pledges, it claims to be EU and USA friendly, the product is in production and will begin shipping in July 2020. at the time of this update it has already raised over € 72,000, almost ten times its initial goal of € 8,000

The ergonomic model and swivel base are such intuitive features that you wonder how it took so long to get there and why there is no other handle with both features, they definitely bought me with that, not to mention its price of just $ 10.93. I can not find cons for now, forcing it a lot could name the putty that I do not know for how long it would be useful.

This handle caught my attention a lot, it is beautiful and the wood texture is always pleasant to the touch.

According to its website, we are dealing with “A smart holder system for painting and sculpting tabletop and board game miniatures – touchless, comfortable and much more precise.”

This system is made up of holder, grips and adapters. It is made of wood, cork and has a metal bar for support, this bar can come in one of three sizes according to what you need.

It includes a removable cork to nail pre-pinned figures or even parts still in the sprue. So far it does not look so bad but then you read as they themselves warn on their page “Defects in grain, natural dry cracks or knotholes are not defects and therefore no reason for complaint or exchange “

What I think about Miniature Grip V3

This handle looks really comfortable and its wooden construction is an extra that attracts a lot of attention, but the bar limiting the height of the miniature and having to buy specially designed corks does not please me much, not to mention the lack of warranty against “Natural defects” of cork or wood and the highest price, the cheapest, for miniatures up to 50mm, comes out at € 27.95, with that I buy almost three RGG 360s.

When I saw this Holder, its apparent simplicity was interesting to me and I thought it should be an economic option, I was wrong.

When you see the Hobby Holder of Game Envy the first thing that stands out is its simplicity and the material in which it is made that looks cheap but functional, also, being compatible with standard bottle caps you know that you have practically free and unlimited bases to mount your minis on the handle, you can also rotate the miniature as you wish, although the space to do it does not look very comfortable.

However, when you review the cost of the device, to put it on the same level as the other options, you get the surprise that it is much more expensive, the two-piece bundle, like the one in the image, has the surprising cost of $ 19, while adding a plastic stabilizer bar would add $ 10 more to the cost.

Lee también  The Waylanders The Board Game in Kickstarter

What I think about Hobby Holder

A device of cheap materials at a premium price does not seem a good option for me, with that I would prefer to buy two units of the RGG 360, my chosen one, or a unit and some paints.

We get to the dearest brand of the hobby, Citadel, for no one it is a secret that Games Workshop products have a great fame and quality, although, of course, they are not free from criticism, such as the design of their paint pots.

At first glance the Citadel handle looks comfortable to hold, it has a clap system for bases up to 40mm, unfortunately intended only for round and oval bases, and some magnets on the sides to stick it to other supports or a metallic surface.

Surprisingly, its cost is the lowest of all, € 8 or $ 10, thought they have rised the price from $6,5 some time ago, but it’s not surprising coming form GW.

What I think about Citadel Painting Handle

The Citadel Painting Handle has a fairly competitive price and good quality, but the fact that it does not offer stability for square bases, in addition to accepting bases of only up to 40mm and that it looks smaller and less comfortable than the RGG 360, it did not make me change my decision.

Definitely I think the Redgrass Games RGG 360 is the best option for me, with the best value for money spent, KS Campaign is online, It looks like a very good deal, for €12 I would get RGG 360 Enhanced Edition with a printed book written by Giraldez, but I think I will get the €17 pledge, to get three caps and 30g of orange putty.

Let me know what you think about this topic and these products on our social networks, what is the miniature handle of your choice and why. 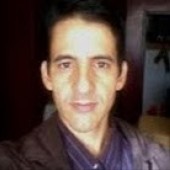 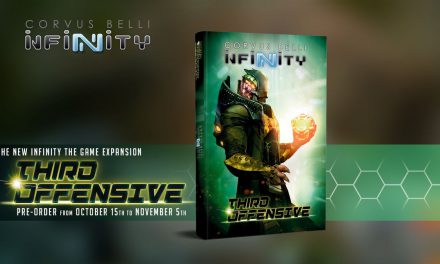 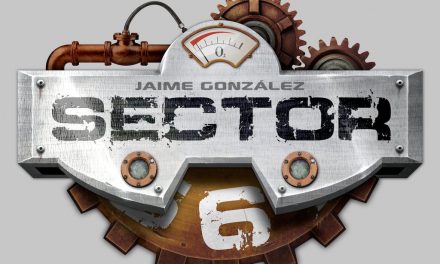 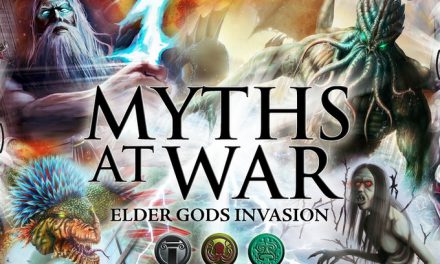 Myths at War (Review and Kickstarter) 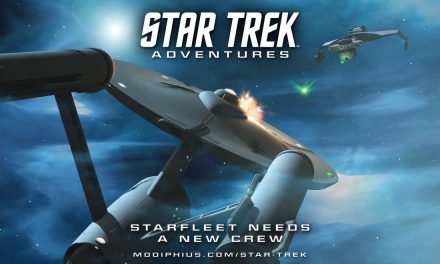