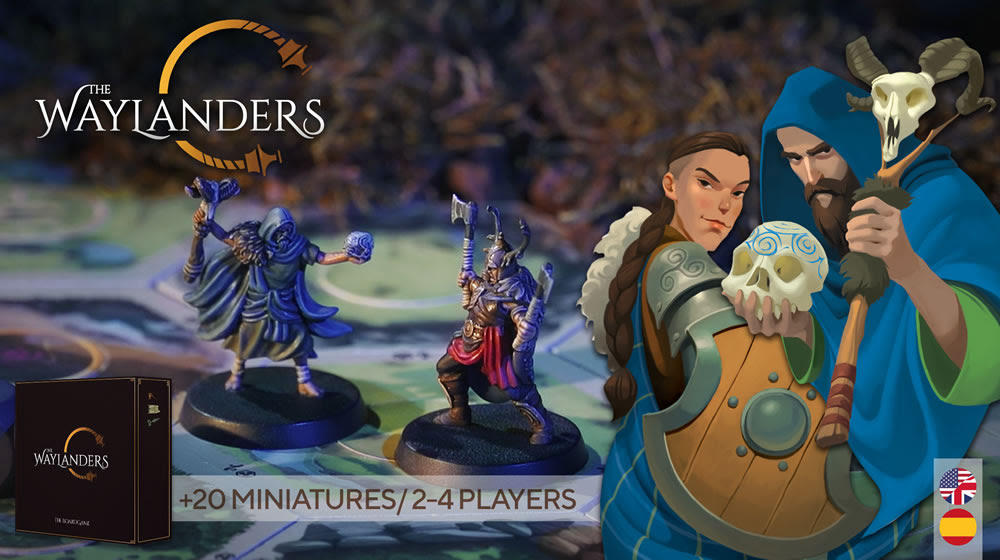 Eclipse Editorial and Gato Salvaje Studio new Kickstarter campaign to bring us a board game from The Waylanders, a new celtic myths-based universe.

Eclipse Editorial, the company behiand two great games as Ratland The Conquest of the Sewers and Skull Tales: Full Sail!, has embarked on the mission of bringing to our tables a game developed by Gato Salvaje Studio a company from A Coruña, Spain, dedicated to video games.

Gato Salvaje Studio has recently announced the upcoming release of The Waylanders, a PC role-playing game (RPG) inspired by nothing less than games like Dragon Age: Origins, Neverwinter Nights 2 and The Legend of Zelda: Ocarina of Time, from which it will get features as spectacular as the development of characters and stories with unexpected dramatic turns and even time travel .

WHAT IS THE WAYLANDERS?

Welcome to Brigantia, a legendary land of Celtic tribes, in a time when myths come to life and dragons are abundant. An Age where adventurers and strategists fight to control the arcane zones to ensure their power.

The story of this game will be inspired by myths and legends of the Celtic culture and the Middle Ages in Europe, there will be different races and dozens of character classes. Something important to note is that in the realization of this video game is involved none other than Mike Laidlaw, the former creative director of Dragon Age.

All this sounds spectacular, but that game will come out in 2020 and video games are not a recurring theme of our website. So let’s talk about what belongs to us.

THE WAYLANDERS THE BOARD GAME

The Waylanders is also a board game designed by Gato Studio and Jaime González García ( Sector 6 , Skull Tales: Full Sail! …), they define it as a competitive board game of tactical battles for two to four players, with an playing time between 60 and 90 minutes, this strategy game uses miniatures, but it is not a Miniatures wargame.

Each game the players must choose a band of five characters and face each other in battles, while trying to accomplish the objectives drawn from the respective deck. To get the victory you must obtain Torque, Victory Points, or try to eliminate the rivals, whichever of the two routes you take can lead you to win the game, everything will depend on your strategy.

The game has some interesting features like battle formations, different ways to get the victory and the ability to make a band to suit your gaming style looking for synergies between the unique abilities of each of the 20 characters in the basic box.

In the artistic field, the miniatures look well sculpted and the design is well worked, although we have been warned that it is still in development but no great changes are expected in the graphic aspect.

If you want to see how the game is played take a look at the video below.

The Waylanders seems to me project worth to consider supporting for the following reasons:

I hope you take a look to the Kickstarter campaign and, if you like it, I really hope you consider supporting it.

You can also help unlocking these social stretch goals:


TWITTER (Kickstarter Exclusive): with 400 retweets of THIS TWEET and 1500 followers on Twitter, backers will receive the Board Game’s Artbook (physical version) and the Video Game’s Artbook (digital).

BGG (Kickstarter Exclusive): If they reach 300 fans on The Waylanders BGG entry, backers will receive an exclusive cloth bag to generate random scenarios, as well as simple rules to do so.

FACEBOOK (Kickstarter Exclusive): if this post get 400 shares and 1500 likes on Facebook, backers will receive two exclusive cardboard boxes, to store and protect the game’s cards.