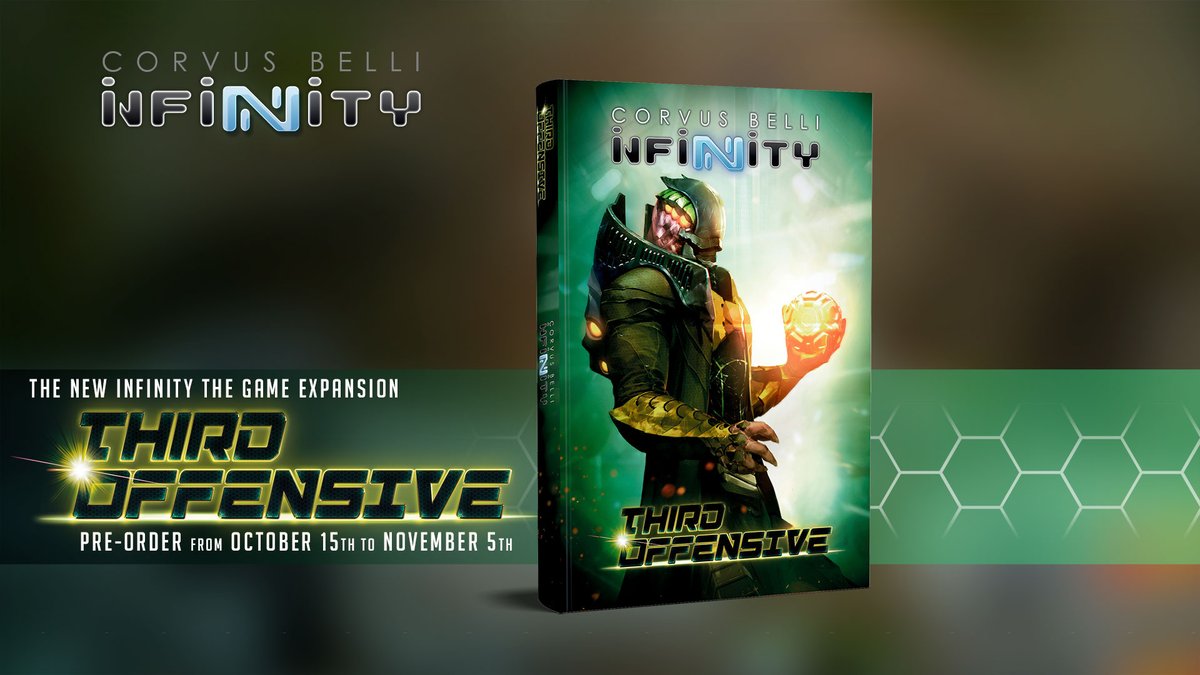 Third Offensive is Corvus Belli’s miniatures wargame Infinity the game, latest expansion, we wrote this review for you to know what to expect of this book.

The Third Offensive book is the most recent expansion for the universe of Infinity the Game, in it we will know the facts behind a new offensive deployed by the forces of the Combined Army on Paradiso planet.

The book comes in hard cover with a nice full color illustration drawn by Luis González, where we can see nothing less than a Shasvastii with an egg in his hand.

The paper is glossy and with a good grammage, thicker than the paper used in some RPG handbooks I own, besides that the paste is of very good quality.

The pages have a nice layout, which makes them easy to read, and they are full of easily identifiable clarifying notes. The beautiful illustrations are full color and there are some scenes in comic style that, if Corvus Belli decided to publish, could be a success.

Third Offensive contains eight chapters, two of them with general background, one of new rules and the remaining five dedicated to different factions with a considerable importance in this conflict and the former releases, let’s see what they are and what these charpters include:

The first pages of the book are dedicated to catch up with the situation in Paradiso, roughly counting the facts so far.

This chapter give us a review of the most important events in the recent history of the planet but also tell us why it is so important and what makes it so attractive to Evolved Intelligence (IE).

Here we’ll learn how the different levels of blockades work to try to contain the alien invasion and how the efforts of the Human Sphere are to prevent the Combined Army from taking control of the planet.

On the other hand, the book explain to us how are the theaters of operations on the planet, what the Tagline project was all about, and that, despite having a common goal, the agents deployed on the planet may have hidden agendas to fulfill for the superpower for which they work. .

In order to be as immervise as posible, all of this is narrated from a technical-informative point of view or from a field journal written by agents thinking on operatives that arrive on the planet to fulfill their duties.

If the previous chapter gave us a tour through the history of the planet until we reach the first events of the Third Offensive of Evolved Intelligence against humanity, in this chapter we will find out what has happened in greater depth, as well as the true objective of this new attack and part of the hidden agenda of EI.

In this chapter we will find subtitles on each region and even on several cities of importance in Paradiso, where we will find important details.

The greatest and most advanced superpower of the Human Sphere, in its chapter we’ll know about PanOceanic life and activity in Paradiso, as well as its combat groups.

As an introduction to its new Sectorial Army, the book devotes several pages to Varuna planet, its lifestyle, the relationship between humans and the natives of the planet called Ilotas, the existence of a terrorist group on the planet and it even let us know about a new sport on the Human Sphere, the Scuball.

Of utmost importance is the creation of the PanOceania New Sectorial Army, as we have said before, it is the Varuna Immediate Reaction Division (VIRD), also known as the Snake Eaters Division.

The Snake Eaters began as a special operations force, but due to its selection criteria, as well as its particular training, the Varuna Immediate Reaction Division has forged a reputation within the Pan-Oceanic military apparatus, being a small force highly mobile and aggressive, what makes it ideal for missions that require rapid deployment.

Something that caused a lot of fuss when the updated troop profiles came out according to the new rules of this Infinity game expansion was the conversion of the Montesa Order of troops on foot to a motorized order. In this chapter we learn how and why of this important change for PanOceania happened.

The chapter ends with the backgrounds of the units belonging to the Immediate Reaction Division and the updated list of the Sectorial Armies.

The eternal competition to the power of PanOceania is the Imperial State of Ju Ying, they also have dedicated a wide chapter with a lot of information, no wonder, they also have a new Sector Army, the Invincible Army.

Likewise, in the previous case we will have information about planets relevant to the hyperpower or new sectorial, such as the planets Shentang and Yutang or the moon Satori in Paradiso.

The content on the background of the Invincible Army is abundant, giving us information about its conformation, its history, objectives, features and many other interesting facts about this force. Something curious is the relationship between the Imperial Service and other divisions of the army.

But this does not stop here, they give us a spectacular look at the interior of the Ju Ying State Empire, the relations of power, citizenship, corruption, it is really a chapter that I enjoyed so much.

They also show us different color schemes for our State Epire units, every one of them beautiful and with its own history.

Of course, as we could expect, there is information concerning the troops that make up the Sector Invincible Army, as well as the updated list of Sectorial Armies of Yu Jing.

When Corvus Belli published the new starter box of their miniatures wargame, Infinity Operation: Coldfront, we met a new Ariadnan sectorial army, the Tartary Army Corps (TAK) whose initial package we reviewed at the time .

The Tartary Army Korps is formed mainly by the descendants of the Cossack expeditionaries who arrived at Dawn, at the beginning of the space exploration by the Human species, and they got trapped in this planet for decades with the rest of the crew when the wormhole which took them there collapsed.

In the chapter dedicated to Ariadna we can enjoy a wide range of information about the planet Dawn and its history, as well as the history of the Tartary Army Korps, we’ll also find out that they have created a group called the Ariadne Expeditionary Corps (AEC for its acronym in English), This being the first military force sent by Ariadna outside their home planet.

Among so much information they also tell us about the performance and importance of AEC through the first moments of the Third Offensive.

In the Infinity miniatures game the Combined Army is perhaps humanity’s greatest enemy, maybe, just maybe, it is bigger than the human being’s own contradictions that make them be in constant war with their fellows.

The Third Offensive expansion book brings us the most complete information about one of the most enigmatic and fearsome races of the Combined Army, the Shasvatii.

We will know the origins of these incredible infiltrators, physiological features, philosophy and even politics, all the content about their culture is quite interesting and fun to read.

In the end there is a bit of background about troops of the Combined Army, among which Bit & Kiss stands out, a former Nomad unit, now at the service of Evolved Intelligence. As well as the updated list for the sector Morat Aggression Force.

The next army is ALEPH, the Artificial Intelligence of humanity. If you wanted to know everything about this Infinity faction you will absolutely love this chapter.

This section begins by giving us all the information about the Special Situations Section, its origin, objectives and organizational structure. Then go explaining details about facilities and give us a look at the training of their operations, it even give us a small introspection of an aspect of the AI.

Of course, there is a vast talk about the objectives of the AI, its methods, its attributions and the natural conflict of humanity with it. A chapter, I repeat, extremely interesting.

Of course , there are troop backgrounds and the list of the new Sectorial Army Subsection of Operations of the SSS, also known as OperationS, and that we could meet in the start box Infinity Operation: Coldfront.

The shortest chapter of all, we’ll have a bit more information about the rebel Ilotas, called Libertos, and it includes the stories of some very interesting mercenary characters, especially Aïda Swanson.

The last chapter has less than 20 pages, it is dedicated to the new rules introduced in this expansion. Some of the additions are:

Just to name a few. These new rules have added enough to the game. Of course, as usual, it is the only thing you can get for free on the Infinity The Game website.

My opinion is that Third Offensive is an awesome background book, with a lot of useful and important information for those of us who are passionate about this game of miniatures and its in-world history.

Regardless of the army of your choice among its pages you will find many important and curious facts about the universe of Infinity and its different factions. I am happy to have this fabulous book because it has allowed me to learn more about some of my favorite factions.

To finish I want to invite you, as usual, to join the largest Infinity group , WGC Infinity, and to participate in our Infinity Writing Contest.