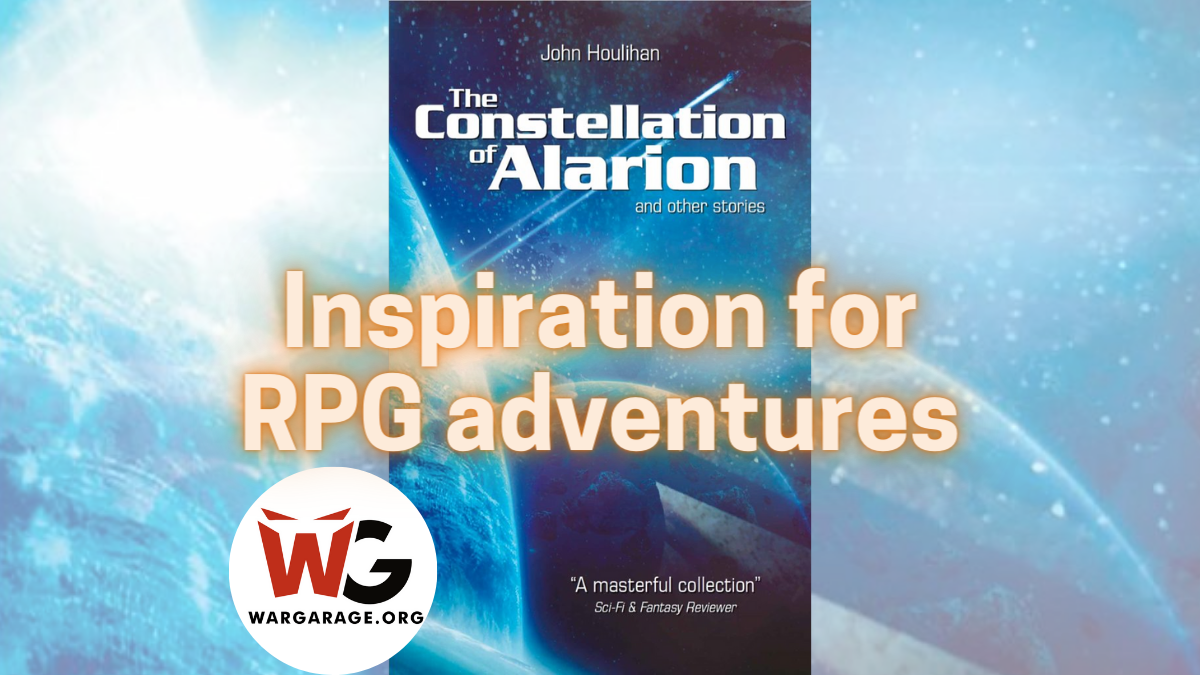 The Constellation of Alarion is a science fiction anthology written by John Houlihan, which can give us good ideas for our RPG campaigns.

John Houlihan’s work is extensive, although he mainly writes within the cosmic horror genre, giving his particular focus to the Lovecraft mythos, he has also published official material such as novels or adventures for Achtung! Cthulhu, the Lovecraftian-themed game that takes place during World War II.

However, this anthology takes us to different paths, science fiction worlds, some cases close future, some others distant future and planets, but all of them with a fairly clear and easy to read prose.

In this review I want to talk about some of the stories that make up The Constellation of Alarion as inspiration for role playing games adventures or campaigns.

The opening story of the compilation is quite short and intentionally reminds us of the Good Doctor, Isaac Asimov, it presents us with a near future where, by government order, robotic nurses with Artificial Intelligence take care of the elderly, providing them with impeccable medical care but without a soul, without that factor that makes us human. How would someone react to such an imposition, being away from their loved one and not being able to attend to them to make way for a machine? Would it be a relief or, on the contrary, would it be seen as an abusive imposition? What could we do in this situation?

It is an interesting premise for a little adventure or sci-fi RPG encounter, it could be used with certain variations to games like Tales from the Loop , Infinity or some other sci-fi game where the AI ​​is sufficiently advanced.

In Charioteer, we meet a glorious duo of brother and sister in a distant future, where wars and invasions have been displaced by something more “humanistic”, a fight to the death between gladiators, the winners secure resources such as grain for their planet for a year, the losers, have no right to anything.

It is a story that explores emotions and themes such as envy, resentment, competition between siblings, desire for recognition, among others. his characters and the way the battles are carried out could be adapted to be included in a game like John Carter of Mars , probably in Infinity , ALEPH has a very Greek theme and this fits him like a glove or maybe as part of the amusements of the Nomads or the unknown alien races of the Combined Army, and even in Star Trek Adventures as part of some extraterrestrial civilization.

Possibilities of this story are quite wide, the subject is interesting, it does not lose its validity and it can make it for a quite fun adventure.

In this short story we have a similar premise to Charioteer, with small-scale combat that decides the destination of resources to avoid costly wars, but with some great details that I cannot reveal without spoiling the story.

I can say that it is a short story, with good material that provides adventures with great potential in universes such as those mentioned above and others with similar characteristics.

This story is about an exalted war hero, Aquillies, who defeated the tyrant who ruled the Seven Systems with an iron fist, until he was beheaded in his hall by the “hero” himself.

Although this may not be the appropriate term, behind his affable attitude, his kindness and “people skills” hides a sadistic villain that nobody would suspect because he is precisely the one to whom they supposedly owe everything, well, almost nobody.

A very well written villain that I am thinking of including in a future campaign, its application is almost universal, wherever there may be a war hero exalted with honors and admired to the extreme, a version of Aquillies can be introduced, from Dungeons and Dragons to Mutant Chronicles or any other among them, in fact, it could be adapted even to a setting like Achtung! Cthulhu .

It presents us with a near future, where we can no longer tell lies, it would be an interesting setting for a game of Dungeons and Dragons or Cyberpunk, some setting where through magic or technology means it is possible to prevent someone from telling lies.

A scenario like that would be fun and quite challenging, certainly interesting and potentially very funny to try.

This story is set in Yellow Dawn World , an alien world based on the Lovecraft mythos and created by David J. Rodger, an interesting and compelling world, full of monsters, changing realities and elements of cosmic horror, mixed with science fiction.

In Dead Reckoning, a group of well-equipped mercenaries travel to a “dead city” full of zombies, orcs and a changing architecture, to search for an Artificial Intelligence which will make them gain a great sum of money.

This story combines action and cosmic horror to immerse you in a terrifying hostile world full of surprises and elements that the Circle of Lovecraft writers loved to use so much.

I could totally see myself using this story as the basis for a campaign in games like Eclipse Phase, Cthulhutech, Mutant Chronicles, and with a bit of adaptation even in Achtung! Cthulhu and The Call of Cthulhu.

The story that gives the anthology its name and one of the best stories in the compilation. In this story we can see a trio of fortune hunters or adventurers travel to an agricultural planet to enter an enigmatic labyrinth that nobody knows who did it or for what reason, but there are legends saying that in its center a great treasure hides the Constellation, whatever that means.

This friendly trio travels in a ship with a powerful artificial intelligence, when they arrive at Alarion they kidnap a gentle peasant to be his guide in the labyrinth where he would never have wanted to set foot because none of those who have entered it has managed to leave. Which is not surprising, as the maze is full of traps, riddles and puzzles and failing them can be deadly.

A very funny story and characters that exude role everywhere, with enormous potential both for use in our games and for the author to continue their development in future adventures.

A setting that can also be used in countless games and settings with just a few slight adjustments, its characters would also be worth using as NPCs as the dynamics between them are so much fun.

In general, I found this anthology quite fun and varied, with an easy-to-follow writing and good themes both in form and substance, in which we can delve into human motivations or reflect on the meaning of wars, we will experience melancholy, fear and laughs, a fairly complete work that is well worth reading for the simple pleasure of doing it.

As for role-playing games, this compilation of John Houlihan’s stories is a true mine, from which we can get ideas for encounters, adventures and even entire campaigns, with memorable characters that will surely remain in the minds of our players.

Conan: Shining Kingdoms: Sons of Vidarna and The Dwellers Below (review)